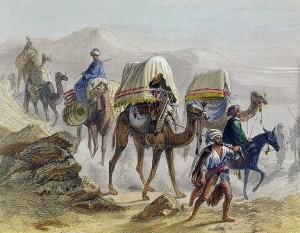 Under Hebrew law, a female child could only inherit her father’s estate if there were no sons. Rachel had brothers and therefore would not qualify as heir.

The household gods, or images, may have represented a large portion of the family fortune. It is likely that they were cast of precious molten gold or silver. If a son-in-law had possession of them, he could legally claim a portion of his father-in-law’s estate.

When Rachel married Jacob she received no dowry from her father, Laban. He was a greedy and dishonest man who frequently shortchanged his son-in-law. Growing weary of the unjust arrangement, Jacob and his family decided to move to his Father’s homeland of Canaan.

Taking advantage of the upheaval, Rachel stole her father’s gods. Ten days later an enraged Laban caught up with Jacob’s camp. He ransacked everything except for Rachel’s camel furniture.<./p>

The “camel furniture” was in fact her saddle. It was a huge affair outfitted with carpets and puffy cushions, possibly with an elaborate enclosure made of tanned skins and colored cloth. The stolen idols were easily concealed in its numerous niches and folds. Rachel was literally sitting on the images.