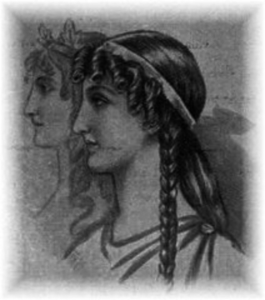 I am Claudia Procula, wife of the man who condemned Jesus Christ to death.

I lived during the time of Christ’s Crucifixion and Resurrection, and was among those first believers to be called a Christian.   I knew Jesus, witnessed His miracles, and survived personal exile and persecution.  My chronicle of those days was recorded in A.D. 38, and over the millennia has been safeguarded deep within church archives as “The Hand of Pilate’s Wife.”  Yet, my story has never been told.  Until now.

Shortly before Christ was crucified, Claudia Procula had a dream.  It was a harbinger of the terrible consequences that awaited her husband, Pontius Pilate, should he participate in the execution of Jesus.

Within 4 years of the crucifixion, Pontius had been called to Rome to answer for his many misdeeds.  After a lengthy trial, Pontius and Claudia were stripped of all possessions and exiled to a mountainous town in ancient France.  Living in great poverty and shame, life was a daily struggle.  During this harsh period, Claudia penned her manuscript.

Written around A.D. 38, it describes her life in Jerusalem, her personal impression of Jesus Christ and the miracles He performed, and her own conversion to Christianity. It also recounts the horrific circumstances surrounding His Sentencing, and addresses the effect His Death and Resurrection had on those immediately involved.

As Claudia watched Christ’s death walk to Golgotha, she mentions eerie changes in the surroundings.  The sky filled with dark angry clouds, earthquakes shook the palace and a thick fog began to form.  Later that day, her terrified servant breathlessly announced the tearing of the Temple Curtain.

Claudia’s Scroll will also portray the Ritual Burial Scene and the Resurrection Event which followed. The spectacular simulation of the Resurrection is based on years of research and cutting edge technology, and will be the first time ever presented on film.

In addition to Claudia’s scroll, other first century testimonies have been incorporated.  An example is the stunning report of High Priest Caiaphas to the Sanhedrin, written within days of the Resurrection:

“To You, Masters of Israel: As I have made a former defense to you, and you have approved the same, I feel duty bound to communicate to you some facts that have come to my knowledge since that communication.  A few days after the execution of Jesus of Nazareth, the report of his resurrection from the dead became so common that I found it necessary to investigate it, because the excitement was more intense than before, and my own life as well as that of Pilate was in danger.  I sent for Malcus, the captain of the royal city guard, who informed me he knew nothing personally, as he had placed Isham in command of the guard; but from what he could learn from the soldiers the scene was awe-inspiring, and the report was so generally believed that it was useless to deny it.

“He thought my only chance was to suppress it among the soldiers, and have John and Peter banished to Crete, or arrested and imprisoned, and if they would not be quiet, to treat them as I had treated Jesus.  He said that all the soldiers he had conversed with were convinced that Jesus was resurrected by supernatural power and was still living, and that he was no human being, for the light and the angels and the dead that came out of their graves all went to prove that something had happened that never occurred on earth before.  He said that John and Peter were spreading it all over the country and that if Jesus would appear at the head of a host, and declare for the king of the Jews, he believed all the Jews would fight for him.

“I sent for the lieutenant (Isham), who gave a lengthy account of the occurrence that morning, all of which I suppose you have learned, and will investigate.  From this, I am convinced that something transcending the laws of nature took place that morning that cannot be accounted for upon natural laws, and I find it useless to try and get any of the soldiers to deny it, for they are so excited that they cannot be reasoned with.  I regret that I had the soldiers placed at the tomb, for the very things that they were to prevent they have helped to establish.

“After investigating the soldiers and officers to my satisfaction, my mind being so disturbed that I could neither eat nor sleep, I sent for John and Peter.  They came, and brought Mary (Magdalene) and Joanna.  These are the women that went to embalm his body the morning of the resurrection, as it is called.  Joanna said she saw but one man (angel); but this discrepancy may have been on account of their excitement, because they both say they were much alarmed (Mary Magdalene reported seeing 2 angels).”

The structure of the film is assembled upon biblical truths, historical fact, and plausible fiction.  Built into the story is the first century struggle for power and the tangle of disinformation set forth by the parties involved.  A spotlight is cast into the souls of these central characters, exposing the underpinnings of their true motives.  The moviegoer will leave the theater with a personal knowledge of these monumental events, having shared them vicariously through the key players.

In recreating the Resurrection Event, we have culled scripture accounts and cutting edge data from the Shroud of Turin.  Our resources include world-class theologians, particle physicists, forensic pathologists, optical engineers, physical chemists, molecular biologists, statistical mathematicians, and the foremost authority of Jerusalem botany.

Recent testing by Dr. Guilio Fanti has dated the Shroud to within the Resurrection time frame.  The overwhelming conclusion suggests that the Shroud of Turin was indeed the burial cloth of Jesus the Nazarene.  Odds that the man on the Shroud was not Jesus are calculated in the range of 87 million to one by Dr. Gary Habermas, to an aggregate probability of one in 200 billion crucified people by professor of mathematical physics, Dr. Bruno Barberis (Shroud, Carbon-Dating and Calculus of Probabilities)..

Jesuit priest and engineer, Paul de Gail, stated, “The odds are one chance in 225 billion that the man on the Shroud and Jesus were different people.”  Italian physicist, Tino Zeuli, quoted de Gail in the 1974 issue of Sindon, likening it to “The possibility of a brick in the street suddenly sprouting wings and taking off.”